Using beds defined to a small area is as much psychological as practical. We started using the square foot gardening method before we moved to France nearly twenty years ago, but found the recommended size limiting, and growing small groups of vegetables in close groups, largely impracticable.

We had beds lined with wooden boards (far too thin in fact), which lasted for around ten years, but then they rotted and fell apart. They were always insubstantial and were too easily moved by a spade or fork wielded enthusiastically, let along a small power rotovator. This year we have now replaced all of our beds with slightly smaller ones (3 metres by one metre) compared to the four metre by one metre beds we had formerly. In fact, we find this size far more convenient for most of our crops

Although concrete blocks are ugly, fairly expensive, time consuming and requiring a lot of labour to put in place, they will last virtually for ever. Once in place, you can grow herbs or flowers in the holes in the blocks and where they join, softening the appearance. But they are sturdy, not easy to shift from position, and should last a life time.

In creating the beds, it is worth spending time to make sure they are positioned symmetrically. I didn't with our first sets of beds leading to years of problems trying to clear them of weeds. The new beds are carefully spaced to allow an electric lawnmower pass down them and to continue in a straight line, to control growth. But we will also be keeping the paths topped up with wood chippings and other organic materials. Once they are well rotted we will add them to the beds and then use fresh materials.

The greatest advantage of using beds of this kind is that you face your garden tasks divided into clearly defined sections. Where previously you faced an entire garden full of weeds in which you carved out or cultivated some rows, and then faced endless weeding for most of the summer, now you have a single 3 metre by 1 metre area, a single task so easy to approach, and a suitable area for a single crop, such as peas, beans, carrots, summer cabbage or some tomatoes. It is so much easier to weed a single 3 x 1 m bed than having to face an entire neglected garden. The paths can be mown or strimmed and the cuttings added to the compost heap or laid around growing plants as a mulch.

Is seed compost really the best sowing medium to use? 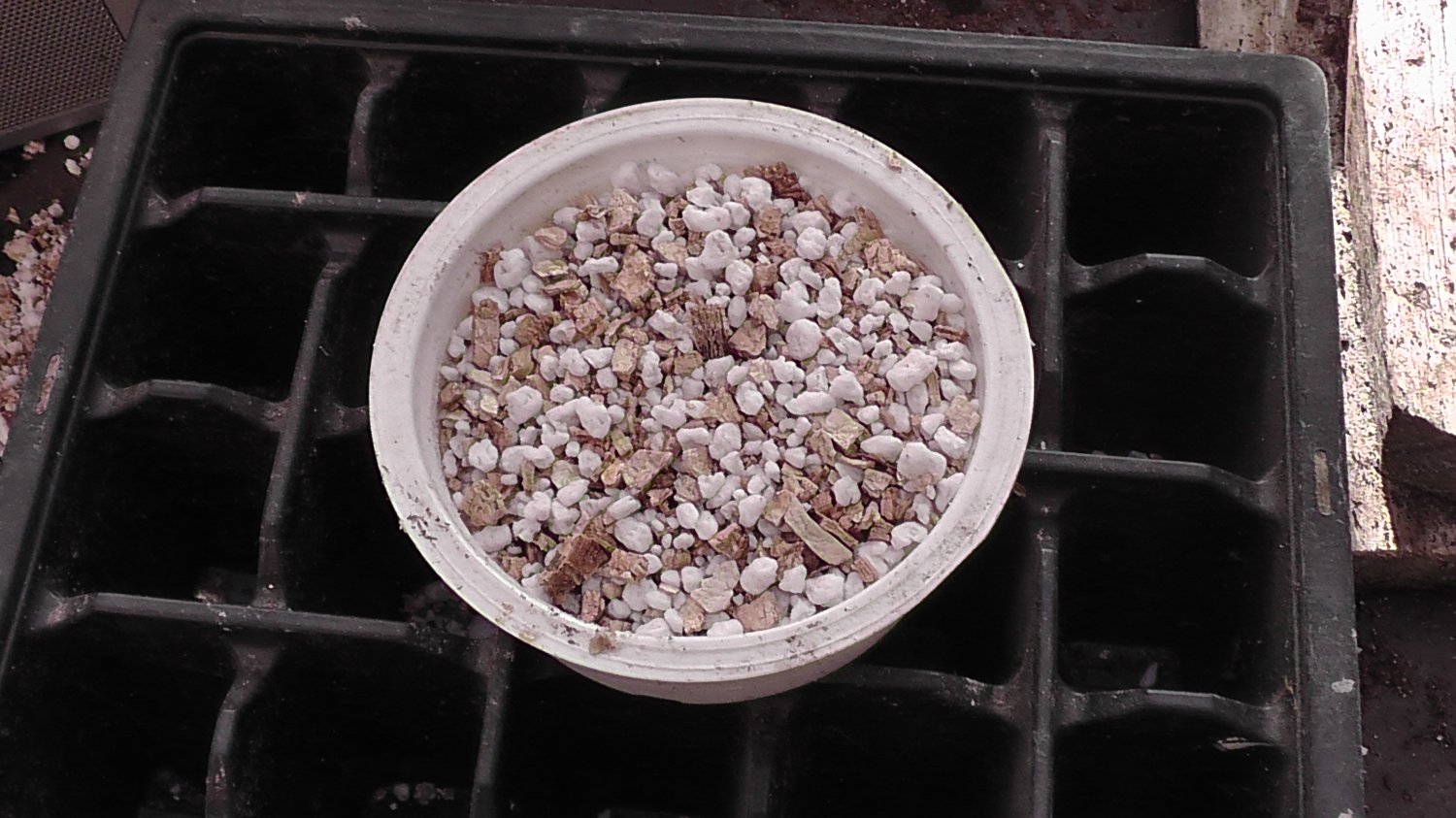 An inert sowing medium is sterile, clean and has perfect drainage

Unlike sowing composts, which can vary tremendously in quality and the ability to retain moisture and keep seed from being waterlogged, inert media like perlite and vermiculite are sterile (so won't introduce fungal disease, retain moisture while draining well, and work fine for germination, allowing seedling plants to be removed without any root damage.

If you buy large sacks destined for insulation purposes, rather than the rip off price charged for so called 'horticultural' grades, this is very economic; far cheaper than a typical potting compost in fact. It is a myth that germinating seed needs plant nutrients, as most seed has everything it needs with moisture to produce the plant to seed leaf stage. In any case, with this method, you prick the young seedlings on as soon as you can handle them, minimising root damage.

But WHY do this rather than using seed compost in a tray?

When growing out of season, or germinating seed like tomatoes, peppers, aubergines and so on, which require heat, my method enables you to put many batches in the small propagator at the same time. You can even stack them! It is an economic use of space and enables you to get going earlier in the season. 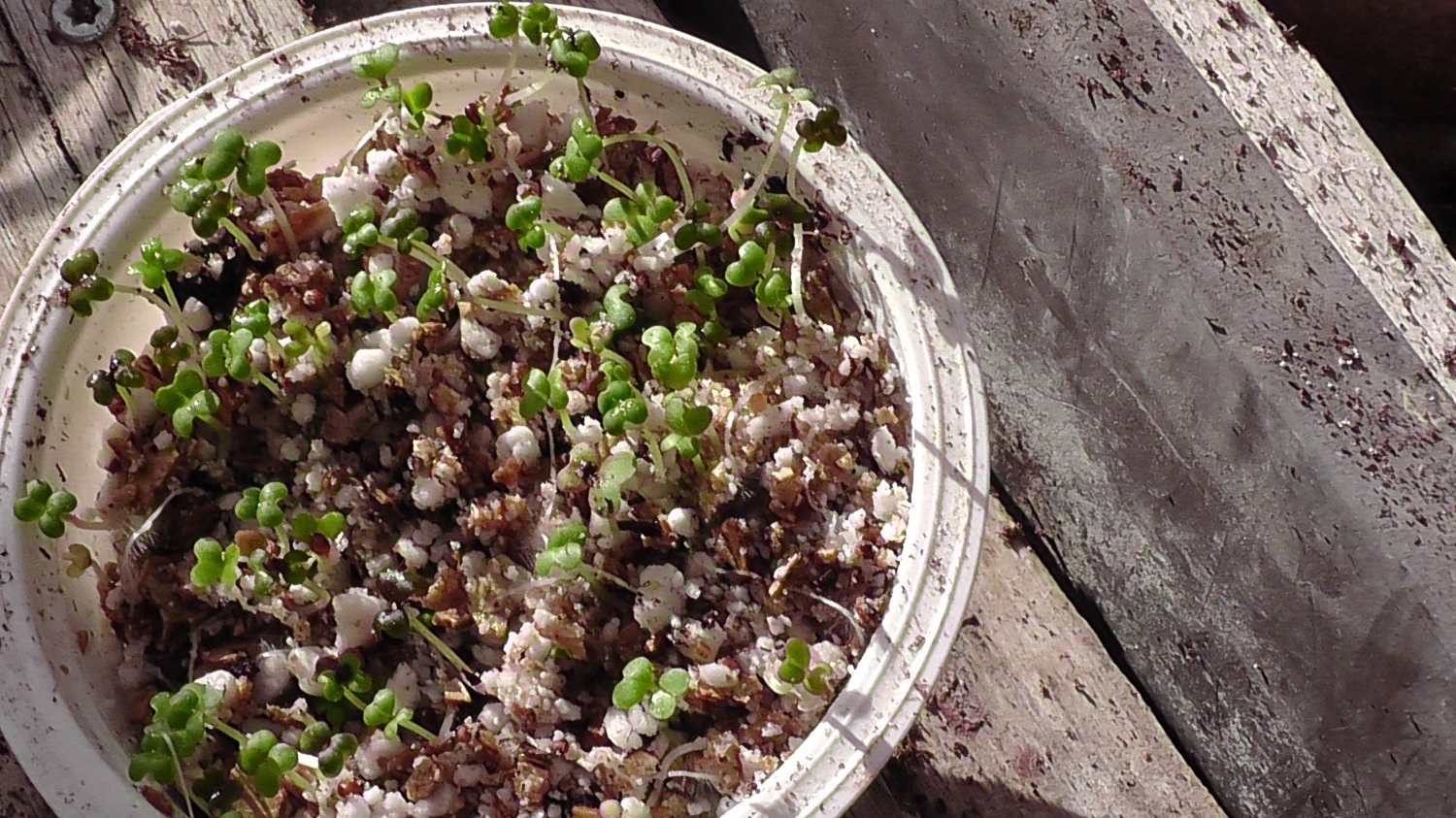 Above are some germinated cabbage seedings. You will note that I use a small round margarine or yoghurt tub as a clear plastic petri dish lid or base fits perfectly over these, retaining moisture and allowing in light.

I write the name of the seeds in indelible pen on the lid instead of using paper labels as I once did. The lids can be cleaned off with white spirit.

As for the seedlings, here is one removed from the medium and you can see how the root remains intact and coated with some of the perlite granules. 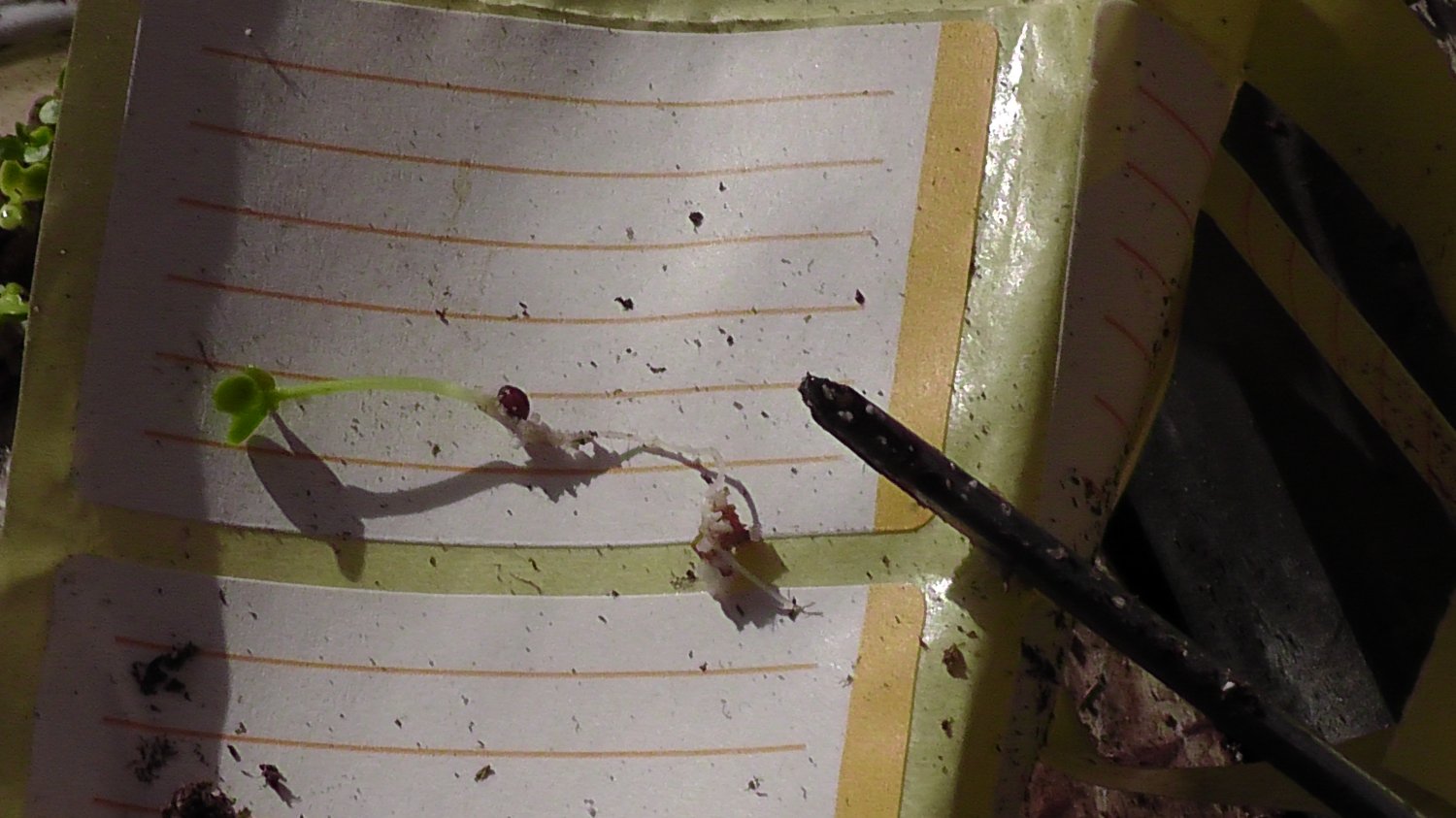 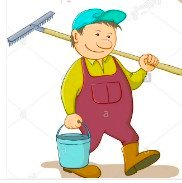 Adrian has gardened for almost fifty years, initially in the Uk where he managed a private garden and large allotment, and latterly, in France, in Pays de la Loire, where he has a flourishing 'potager' on over a hectare, plus two large greenhouses and other structures for growing..

In addition he manages several small wooded areas and various other areas around the house and gites.

If you would like to make a comment or leave a message, please use the message board below.

If you are interested in staying in one of our charming rural gites in the beauty and tranquility of the Pays de La Loire, then just click the link on the header. 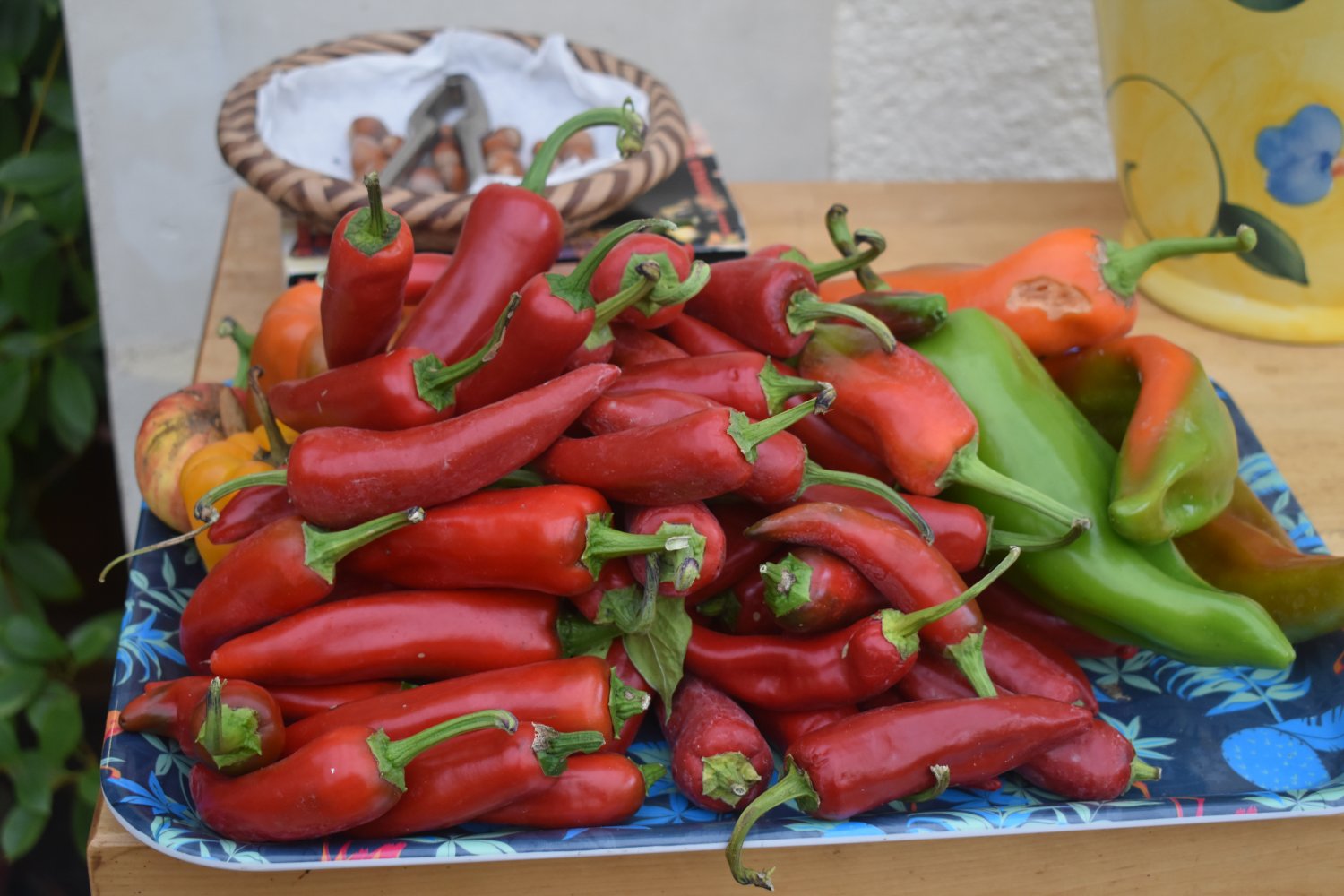 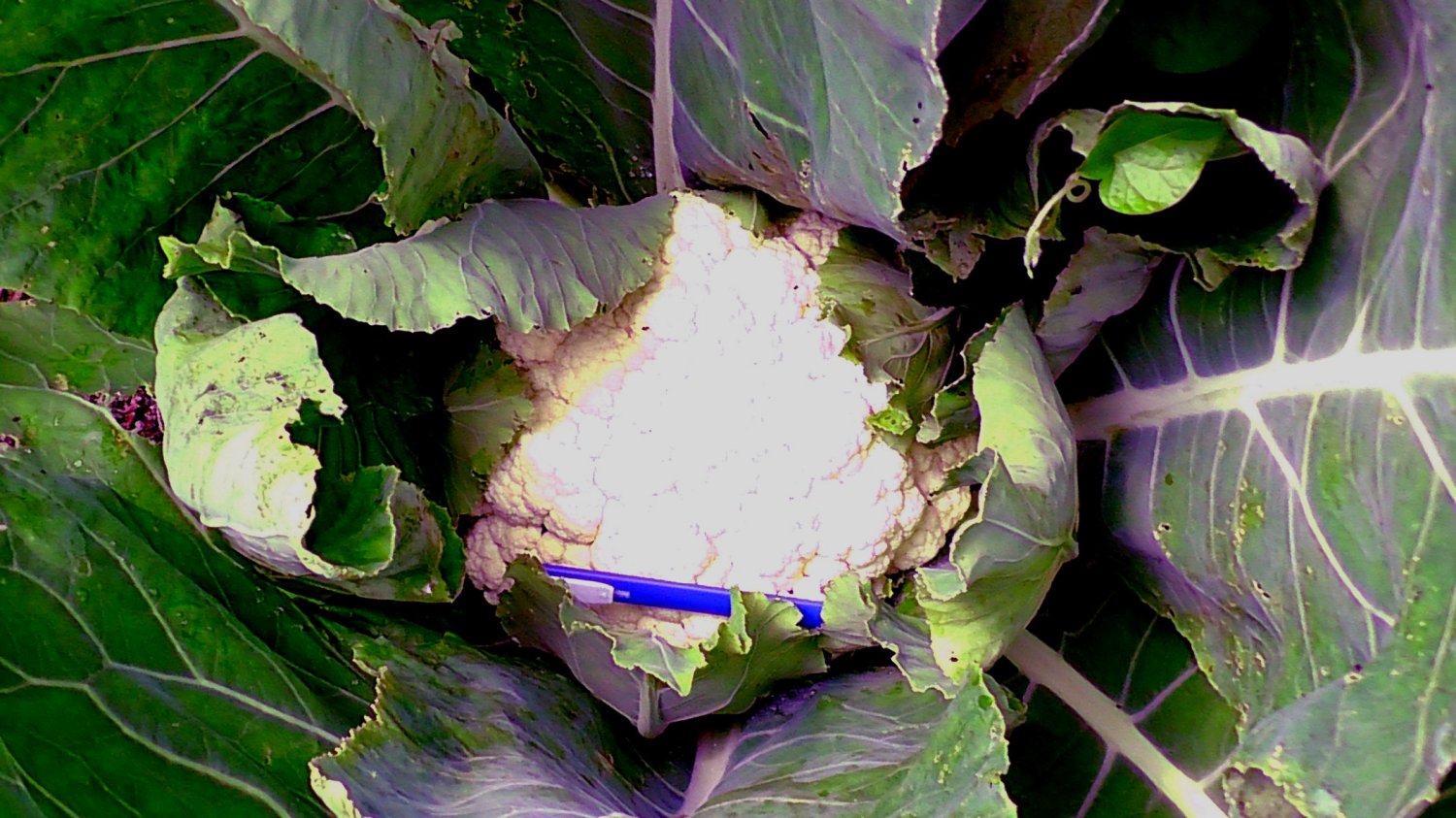 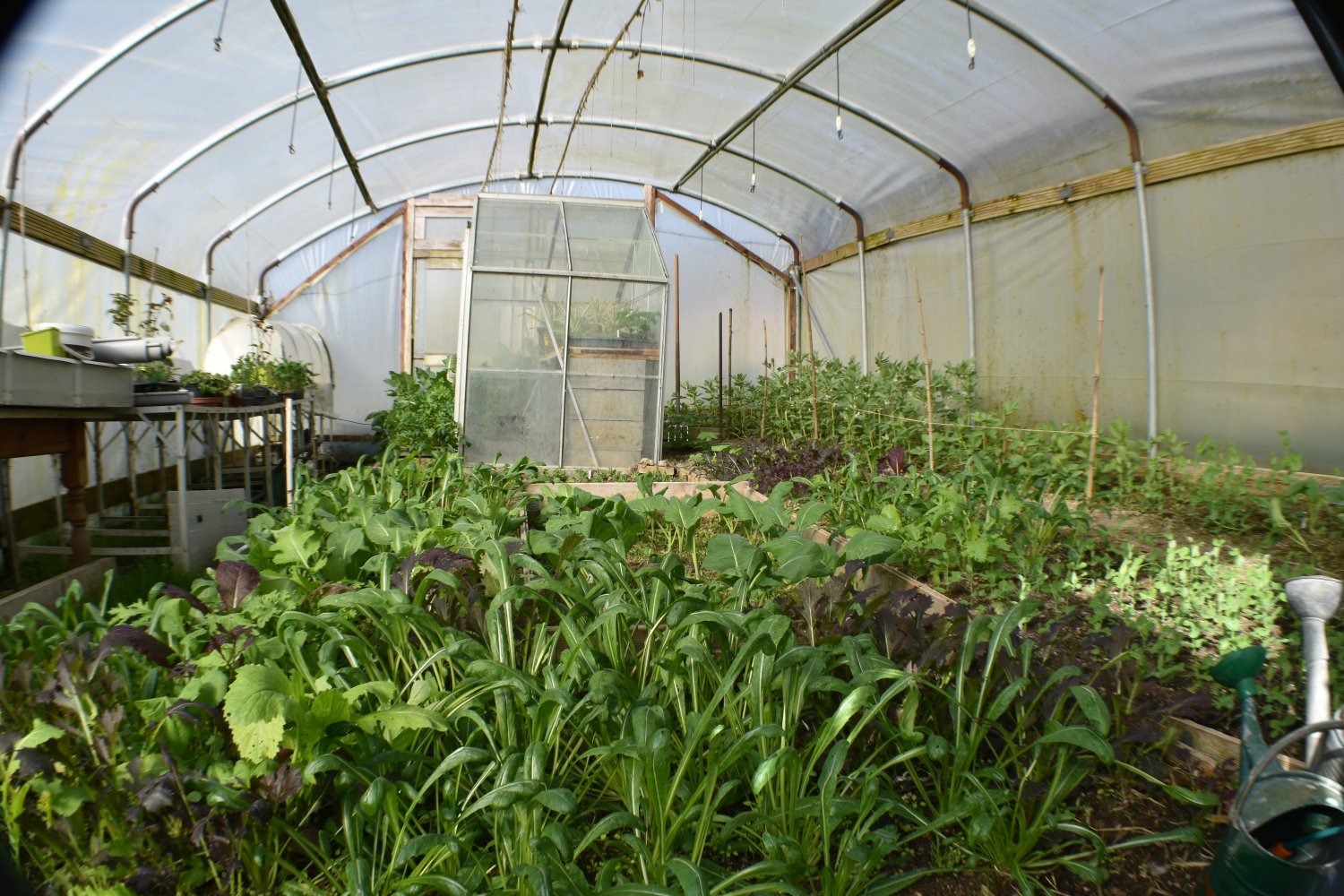